Paladin Registry, Wiseradvisor, Guidevine and other similar services basically work in this fashion: 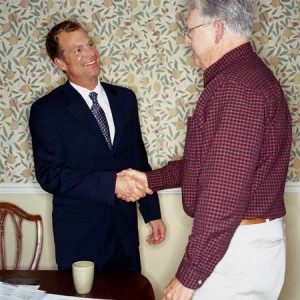 Does it pay off, for you the advisor, to Paladin Registry, Wiseradvisor, Guidevine?

Before I share advisor comments with you, what immediately strikes me is the following

If in fact my assumption is correct, that few consumers will fill out the online form, then in order to create sufficient volume, Paladin, Wiseradvisor, Guidevine, et al would urge you to expand your radius.  One advisor says:"

"...when I wasn't getting very many leads, they wanted me to expand my mileage radius.  I wouldn't do it because people will not drive an hour to meet with someone who called them because of an internet form they filled out."

"As a current wiser advisor 'member' I have received 5 'leads' in 5 - 6 months. Got 2 apts, 1 NO $$, the other is still 'thinking' about it. The charge is $75/lead. Still calling the other 2 (one wanted an advisor based in this ski resort he lives in), the other went w/ the first guy that called em."

In fact, several consumers who provided feedback also mentioned they were matched with advisors that were distant and the same was reflected at this site.

At first, you may think the distance is not an issue as you will go to the consumer. However, a consumer is till less likely to hire you if you are not in their community.  Additionally, if you are in competition with an advisor operating within their community, you will likely lose the competition. Last, this distance problem illustrates that these services are not able to generate very many prospects for you within a reasonable distance.

You are placed in a dog fight with other advisors competing for the same prospect.

Because these matches are not exclusive, you will be in competition to win over the prospect.  So you pay for the lead and must still win the dog fight.

"I eventually quit using it because I kept losing to other advisors (they send the client three advisors to choose from).  I'm not a CFP, and at the time only had about 5 years experience. So, when the prospect was comparing resumes, I usually lost. If you aren't a CFP and haven't been in the business for over 10 years, I wouldn't waste my money with them either."

The point is, unless you are very good on the phone (i.e. you know how to ask increasingly revealing questions) and you have great credentials, you will likely lose the dog fight.

I am POSITIVE that some advisors have good results with Paladin, Wiseradvisor and Guidevine and have secured some clients.  But realize the limitations, the cost per lead and the low volume of leads to expect.